On 19 September 2009, 7 teachers and 10 pupils from Northland Primary School did their part for the environment by collecting, categorising and disposing  litter at Changi Beach.

The amount of rubbish found on the beach and floating in the sea was astounding! We picked up items like styrofoam pieces, plastic bottles, cigarette butts, and even a plug and a slipper.

Picking up all this trash at the beach was pretty tedious but we left with smiles on our faces, hoping we had done our part to make it a cleaner place. It was a wonderful learning experience for all of us.

Last week we blogged about a new Pasir Ris site that was to be cleaned this week – Pasir Ris Site 6. A hidden paradise, it is well away from the BBQ pits, pavilions and crowds of Pasir Ris Beach Park. Today, we finally could eagerly head back to clear the beach of trash! Three groups hit the site – Bedok View Sec Teachers, Cuon Scouts and a handful of independent sign-ups.

The morning started with the sky looking cloudy but the weather held up for us. We entered the site near BBQ Pit 64 and were welcomed by a mud lobster crawling across the beach, oblivious to the group of volunteers happily snapping photos of it!

Glancing over the site when we walked in, I felt that it actually looked quite clean and very serene. But as we ventured deeper in, the trash load increased to astonishing proportions! Odd objects peppered the shore – a tattered sofa, half a fridge, water barrel, rusty oil barrel, food containers (with decomposing food still inside!), straws and motorcycle helmets!

The worst part was at the end where a stream enters the sea. The entire stream was littered with trash – the majority of which were plastic bags.

This small area was enough to keep all of our independents fully occupied. Sand flies swarmed around our feet and this was supplemented by numerous mosquito bites! We ignored this all as we filed our hands soaked our legs as we filled bag after bag with trash.

The Cuon Scouts saw that we needed helped and sent a troop in to help out. Together, we hauled many bags of trash out, including a couple of big barrels too.

The tide came in too fast and too soon, making the shallow stream deeper and deeper. The sky began to release drops of rain, so our volunteers quickly hauled bags of trash out for weighing and disposal. Bedok View Secondary School teachers collected 81 kg of trash and the Independents + Cuon Scouts collected 186kg.

Guess what? Our excitement did not end there. The NParks cart which came by to pick up our trash got stuck in the grass! Well, perhaps because we loaded it with 186kg of trash and two big barrels! Our gung-ho Independents guys got together and helped to lift the cart out; great group effort, guys! 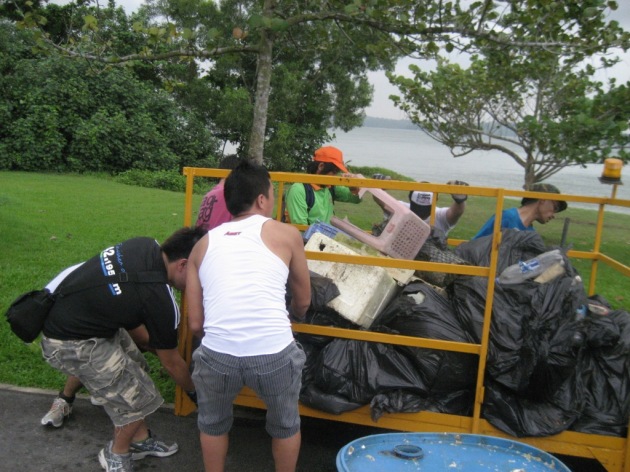 That moring, we left feeling great after a good morning’s work, leaving the Hidden Paradise a little cleaner than it was before…

The sky looked rather gloomy when we left our homes for Tanah Merah this morning. Nevertheless, the SUVEC off-roaders were determined to complete their mission – Operation TM Cleanup – this is the third year running SUVEC has contributed to the International Coastal Cleanup Singapore

Driving our mean machines (four wheel drives) through the Changi Coastal Road in the wee hours of the morning, we were praying that the heavens would not open up too soon.  A cozy group of 12 (10 adults and 2 children) converged at the NSRCC Sea Sports Centre carpark at 0830 hrs.  Some had no breakfast, others were fasting and everybody was in a chirpy mood.

After the briefing formalities (objectives, data collection and safety briefing), we headed towards the beach affectionately coded as Tanah Merah 3, Tanah Merah 4 and Tanah Merah 5 (about 500 m worth of coastline) respectively.

Despite the relatively small number of volunteers, we worked in pairs – one picking up the litter while the other recording the data.  The role was reversed after half an hour. The debris collected was predominantly from shoreline and recreational activities. Styrofoam pieces and cigarette butts were in abundance. One of the pairs managed to find a horseshoe crab entangled in a fishing line.  Alas, upon closer examination, we realized that the crab could not be saved!

Some of the more peculiar items found include a cone which was brought in by the tide, a big blue jerrycan (possibly from ocean/waterway activities) as well as a huge can of milk powder.

The initial plan was to transport all the debris collected to nearby Changi Village using our 4WDs. However, we met up with one of the coordinators, (ICCS Otters) Vu Tinh Ky who saved us all the trouble by telling us to leave the items collected at the rubbish point along the beach as prior arrangements had been made with NParks for the items to be disposed later.

Then, it started to pour! The heavens opened up at around 10.20 hrs leaving us rather drenched. When there was no sign that the rain would stop and in the interest of safety, we called it a day.  So we drove up to Kallang MacDonald's for a debrief, fill up the empty stomach as well as to collate the data. Despite several attempts to upload the data submission spreadsheet via Wireless@SG, it never went through. Since the data is to be submitted urgently, arrangements were made for to have it delievered at a separate location [Thanks, SUVEC! – ed.].

Overall, we had fun although we wish we could do a longer cleanup.  Cannot wait for the next cleanup event!

Kudos to the students and teachers from Victoria School who were the early birds that started the cleanup at 7.30am.

Armed with gloves, tongs, trash bags and enthusiasm, the volunteers at each site separated into different teams to complete their mission. It is also a mini family outing for some parents who involved their cute children for this meaningful clean up activity. If kids can do it, so can you!

Cigarettes, styrofoam pieces were the most common debris found. Some of the volunteers found peculiar items like microphone, rubber mat, and a huge wooden plank that was the size of a car. In addition, a fishing net with a crab and corals entangled in it was discovered by the ST Dynamics’ volunteers.

Due to the heavy rain at 10.10am, all the volunteers have to stop their cleanup earlier and they proceeded to consolidate their data.

A big Thank You to all the volunteers who have helped out with the clean up at ECP!

This didn’t deter the 22 volunteers from Fo Guang Shan Buddhist Temple. They tackled Punggol Beach with zest and enthusiasm. The trash load was light; the source of the debris was mainly from shoreline and waterway activities.

Zeng Rong, the organiser, did a great job by briefing the volunteers on the objectives of the cleanup and the method of collecting data, before heading out to the beach. Thus, everyone knew what to do and the cleanup went smoothly.

Although the trash load was light, there were many small items such as fragmented debris like styrofoam bits , bottle caps and and fishing lines.

However, it showered on participants at about 10.15am, an hour after the cleanup had begun. So they ended a little earlier and began weighing the trash. ZengRong did a debrief , took group pictures and ended the cleanup .

The cheery spirit I witnessed was admirable. A great job by both the volunteers and the organiser, well done folks!