This September, Organsations which used to work at Kranji Mangrove (adjacent to the Kranji Nature Trail managed by Sungei Buloh Wetlands Reserve), will be relocated as the site is undergoing works as part of the Sungei Buloh Master Plan. This is good news, for once complete, the Kranji site will provide a buffer to the main reserve: 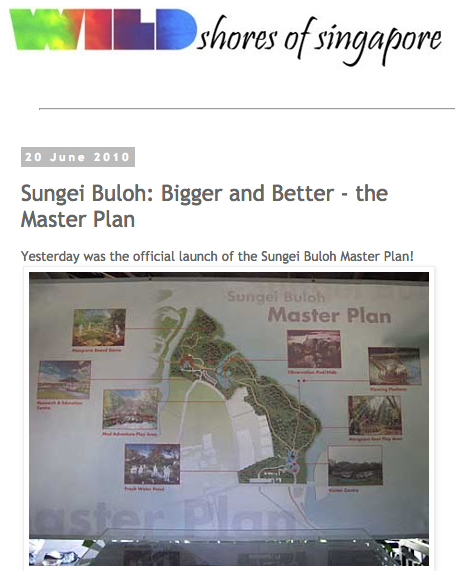 As North-West Zone Captain, it’s my job to open new sites – gradually, since each site requires recces to evaluate the safety, impact and operational details of running a cleanup at the site, and then later, orientation of volunteer Organisers and help in planning operations in the early years. This is necessary for mangrove sites as they present a difficult terrain, usually require a long haul to the Trash Disposal Point and often no support facilities are present.

I spent the last three years supervising operations at Pandan Mangrove in South Zone and Zone Captain Kelly Ong now runs a stable operation there. So that has freed me up to open new sites in the north-west.

Well, last year I started making plans and Andy Dinesh (the Recce Captain) and I explored the north-west in July 2010.

The sites we identified are:

20-year veterans Singapore American High and Middle Schools anchor cleanup operations at Kranji East mangrove, a small area with an extremely high trash load. The SAS organisers were first brought there in March to get mentally prepared. They’ll be great but I’ll have a Site Captain there to help out. Working alongside them will be first-timers Transport Hub West.

Excelsior International School (now Nexus International School Singapore) joins NUS High School at Sungei Buloh West, which I referred to as a luxury site after the recce. It is a small site which needs to be worked on sensitively so these two groups will have a different kind of challenge. This is an area of Sungei Buloh Wetlands Reserve which few people reach and in fact they will be entering the reserve through the rear gates! It wi be a long haul to the trash disposal site.

During the ICCS Workshop, I spoke to the Environmental Engineering undergraduates who have been handed down the job of leading NUS’ ICCS main contingent since 2003. They were quietly confident, so I have entrusted them with the task of relieving Lim Chu Kang East mangroves of its load of marine debris.

We will conduct our first recce this Saturday and I look forward to helping them pull this off safely and effectively. It will be a great challenge for them but a unique opportunity to start up a site. And the new Deputy Zone Captain Jessica Ker is getting baptised in the experience alongside them!

The site is about 80 metres away from Lim Chu Kang Lane 9.

An insult of plastic in the mangrove –
this stream is completely covered by marine debris.

The trash load on shore is much milder.