To celebrate World Oceans Day 2012, ICCS conducted two beach coastal cleanups at Pasir Ris Site 6 (PR6) and Tanah Merah Site 7 (TM7) on the 9th June 2012! On this sleepy Saturday morning where the sky was overcast and with intermittent showers, 75 volunteers turned up to do their part for the marine environment!

At PR6, 50 volunteers turned up to help clear a non-recreational beach site and everyone worked hard to try to clear as much trash as they could within the 90 minutes. The NE zone captains (Kai Scene, Chen Kee & Yi Yong) recruited energetic PR6 volunteers from ACJC student council, general public who responded to the World Oceans Day cleanup post, SgCares and ICCS Otters (Kah Ming, Jocelyne, Marcus, Kelly & Weiting).

After a full 90 minutes of cleanup, we had used up all of the 140 trash bags! The ICCS team then quickly organised the volunteers to form a human chain to transport the trash quickly and efficiently out to the collection point.

Participants form a human chain to transport out the numerous bags of trash.

Look at the amount of trash collected, a total of 1,100kg of trash removed!

All the trash was weighed and we removed a total of 1.1 tonnes of trash from the site! After 90 minutes of hard work, there was definitely a transformation from a trash-filled beach where food wrappers and plastic bags littered all over to a visibly cleaner PR6! Kudos to all PR 6 volunteers for your time and effort!

Over at TM7, even though the cleanup was delayed 30 minutes by the rain, 21 highly enthusiastic volunteers from SgCares, together with Ivan, Dinesh and Tanah Merah Zone Captains (Benjamin & Gladys) started at 9.30am to work the shores. Each volunteer had a trash bag in hand and off they went to remove any trash that they saw.

TM 7 volunteers help to remove sand from the interior of tire before moving to disposal point! (Photo from Benjamin Tan)

Even though, the TM7 were a smaller group of volunteers, they managed to remove 66 trash bags within 90 minutes. This amounted to an impressive 343kg of trash, excluding bulky items! Great job, TM7 volunteers! 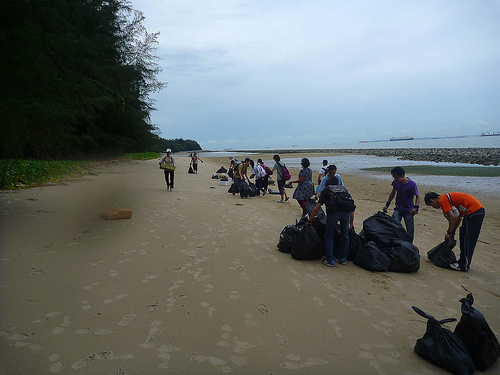 TM7 volunteers bringing in the trash (Photo from Ivan Kwan)

Well done to all the volunteers who turned up for the two beach cleanups today! These efforts have made a difference to the marine environment. Do share your experience with your family and friends as part of the celebration for World Oceans Day. Spread the message and help protect our oceans!

It was a with a saddened heart that I learnt of Seba Sheavly’s passing from Ocean Conservancy’s Sonya Besteiro. 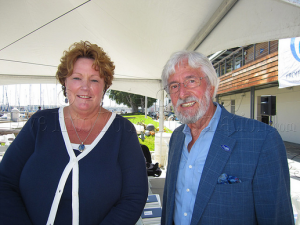 Sonya had corresponded with international organisers as staff of the Centre for Marine Conservation from the 90’s (see this CNN interview from 1999).

I’m writing with the sad news that Seba Sheavly, a leader in the marine debris field for two decades, passed away last Thursday after a long battle with cancer and lung disease. She was a keystone figure in our community.

Seba worked tirelessly as a marine environmental advocate. She edited or contributed to most of the major marine debris-related reports of recent years, including ones from UNEP, UNESCO, GESAMP, US EPA, and the National Academy of Sciences.

I met Seba in person at last year’s International Marine Debris Conference, an event that she was instrumental in convening despite her illness at the time. What impressed me most was her willingness to work behind the scenes to get things done, without asking for personal accolades.

A scholarship fund is being established in Seba’s honor. Guidance on donating will be posted soon.

I thought I’d remember the passing of this tireless warrior for the marine environment by suggesting we read (or re-read) her 2010 “Lessons Learnt” report prepared for the EPA:

It’s World Oceans Day on the 8th June! What better way to celebrate World Oceans Day by doing meaningful for our shores? The seas have provided us with much resources, many of which we have taken for granted, food and even oxygen from phytoplankton. Even if you live far inland, the oceans and us are interconnected on many different levels.

This World Oceans Day, we encourage you to take this opportunity to give back to the oceans! Make a difference to the marine life that call our shores their home and personally experience the impacts of plastic on our shore. We invite you to come celebrate World Oceans Day with a 90 minutes coastal cleanup activity at “hidden beach paradise”Pasir Ris Site 6 (PR6). 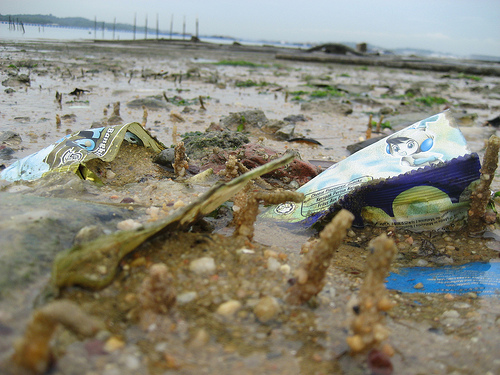 Your efforts will help reduce the high trash load at PR6 which usually consists of plastic bags, food wrappers and straws. These plastics can cause damage to the marine ecosystem and might eventually break down to microplastics and enter the food chain. These concentrations of toxic chemicals leeched from the plastics may magnify and move up the food chain to reach back to humans. Besides removing marine trash, learn about the diversity of marine life just at our own shores! These shores are often overlooked but are teeming with life!

Learn their identities when you head down to Pasir Ris on June 9th!

For those interested in tackling Pasir Ris Site 6, do note the following:

Note:  It takes around 10 minutes to walk from the nearest carpark (Carpark E) / bus stop to the site. For more details, you can refer to this page.

View our post on Earth Day clean up for a glimpse into what you may be involved in!
If you wish to share your photos with the community and want them in our ICCS Flickr repository, you can zip and wetransfer to iccs@rafflesmuseum.net. Please send the files with the following details (name of photographer, date, location).
0.000000 0.000000