On 09 Apr 2016, 56 participants (44 students, 6 alumni and 6 teachers) of Bukit Batok Secondary School (BBSS) hit the beach for 90 minutes from 8.30am for a year-round coastal cleanup and removed 584 kg of trash from Pasir Ris 6 beach. This non recreational beach west of Pasir Ris Park is host to marine life and is not cleared regularly of marine trash. 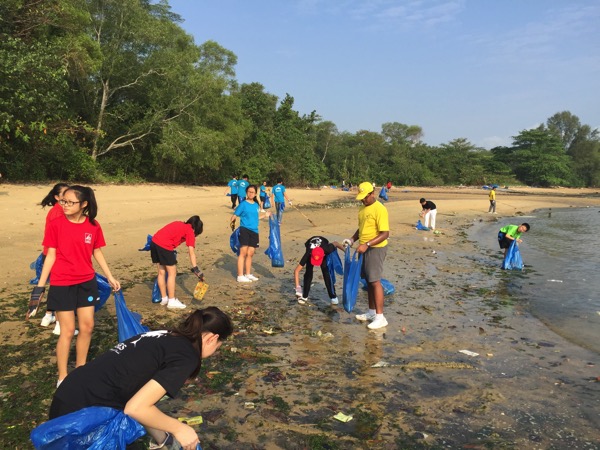 This was the third coastal cleanup BBSS conducted at PR6 this year, after the earlier cleanups of 20 Jan 2016 and 27 Feb 2016. They plan three more in July, August and September – the last will be part of the annual data-gathering International Coastal Cleanup Singapore. Isn’t this tender loving care for the marine environment and marine life at Pasir Ris wonderful?

BBSS’ cleanups at PR6 were carefully thought out. Mr Syam Lal Sadanandan, the Dean Normal (Technical) at Bukit Batok Secondary School wrote in November 2014 to ask for an opportunity to contribute to environmental protection. Emails were exchanged to prepare the group, fix dates and inform relevant agencies, before he and his fellow teachers met NE Zone Captain Yang Yi Yong for a recce of the site on 7th Feb 2015.

Ready for a series of safe cleanups, they conducted two on 14 Mar & 23 May 2015 but sadly September’s ICCS was cancelled due to the haze.

This year they are on track with three cleanups under their belt already, and have already relieved Pasir Ris 6 of more than a tonne of trash!

The continued and repeated efforts of small groups at a specific sites is extremely helpful for the protection of non-recreational coastal sites. So under the Year-Round Coastal Cleanup programme, we have tried to relieve sites of their marine trash load in a sustained but non-impactful manner:

The insult of marine trash on our shores is relentless. Certainly working on upstream issues is critical to the solution, and we pay close attention to those who champion this relentlessly in Singapore such as Zero Waste Singapore. In the meantime, we can help marine life immediately and directly. Thus we hope to encourage fieldwork-savvy groups to consider conducting more than one cleanup at a favourite site each year.

Sungei Pandan mangroves was a fairly recent site we turned attention to in 2008. It is no longer covered with a mat of plastic but we are not done yet. Some smaller sites nestled there are both tough sites to work in and sensitive sites we must be careful with. But we will persist and think of a future where none of this is necessary and marine life flourishes on our mangroves and shores in great health.

Meanwhile, the actions of organisers like the teachers of Bukit Batok Secondary School give me much hope!