At 4 yrs and 10 mths, Jackie Lim was Chek Jawa’s youngest hero today. Accompanying her parents who were part of the Dow Chemicals ICCS 2010 contingent, she gladdened the hearts of all who saw her at work on Chek Jawa’s southern shore.

Taking full advantage of her light weight, she ventured onto parts of the muddy shore adults had to be cautious about for fear of sinking! Deftly using her pair of tongs under the watchful eyes of her parents, she made quick work of many pieces of plastic accumulated since last year’s cleanup.

An early start to environment responsibility

Jackie volunteered to help carry one of the abandoned kelong fish nets retrieved by adults from the shore.  Calling out the items for the data recorder to note, Jackie showed that size doesn’t matter.

One can start caring for the environment at a very early age.

The Singapore Navy’s Naval Diving Unit turned up at Pulau Semakau on 30 Oct 2009 for Project Eco-Frog as part of their CSR effort for 2009.

Within minutes of the impressive landing, an operations command centre complete with medic station was set up and the various special focus teams (diving and shore) got busy with their CleanUp preparations.

Whilst some of the teams took turns to attend the landfill tour and video presentation by the ever-ready and friendly NEA Semakau operations staff, the diving teams un-rolled their zodiac inflatables which were duly filled with air and fitted with outboard motors and in no time at all, the boats were ready and in the water by the slipway. 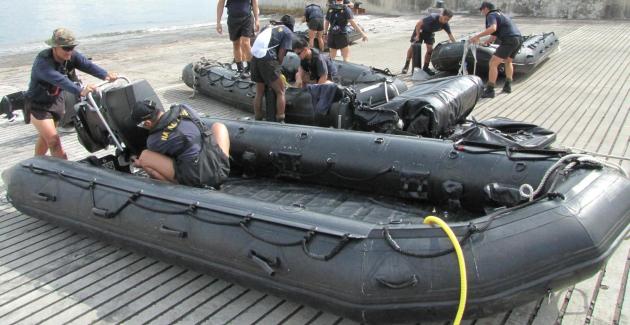 The shore teams proceeded with the landfill tour and thereafter went straight for the Northern shore through the forest trail. There is an incredible amount of ‘marine’ trash which has accumulated on the Semakau shore over the years. These items do not originate from the landfill being operated by the National Environment Agency on Semakau but arrive as flotsam after being carried on visiting tides and ocean currents to the Semakau shore.  Some items have become buried in the sand over the years or have been blown by the coastal winds further inland to become lodged below the dense vegetation of the coastal shrubs and trees.

Although the tide was rather high at about 2.0m at 10am, the shore teams managed to make swift work of the strand line debris. These encompass plastic bottles, glass beverage bottles both whole or broken in pieces, detergent or chemical containers, styrofoam bits, plastic sheeting, tires, abandoned fishing nets, food wrapping, and various other mainly plastic material which have floated in with the daily tides.

Care had to be taken navigating the shore as there were occasional broken glass pieces amongst the pebbles and rocks. Some areas also had an unusually high concentration of wooden material which seemed to blanket the natural shore thus preventing the growth of mangrove vegetation.  Many of the wooden planks had rusty nails in them and so these were removed as well as they posed a safety concern to anyone walking on the shore. 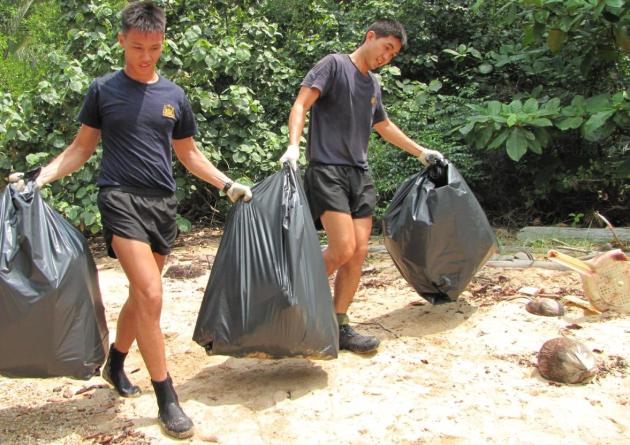 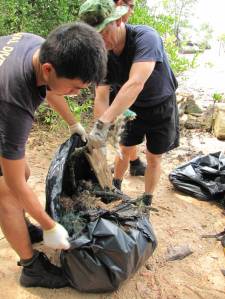 The diving teams had some success at their dive sites just off Semakau’s amazing seagrass lagoon and the reef fringing it although the particular sites showed no significant build up of debris. Hopefully, the rest of Semakau’s deeper waters are in just as good a condition. Their condition can only be ascertained after further dive recce trips.

All the bagged items were removed by the zodiacs from the shore direct to the slipway. This proved a much more efficient way of transferring the trash. The alternative would involve carrying the numerous heavy bags a long long walk down the shore and through the forest trail to the landfill service road.

In total, Project Eco-Frog saw 96 staff removing 96 trash bags filled with 455 kg of waste material in about 1.5 hours. This was enough to fill the NEA bulldozer’s grab!

This is indeed a great first effort and will go some way towards ensuring that the Semakau shore is better looked after and its various interrelated ecosystem components will continue to thrive for years to come.

About 325 people, schoolkids and adults, got up really early today to head for Pulau Ubin for their part in the International Coastal Cleanup Singapore 2009.

It was a glorious morning with clear skies and they got to work immediately picking, pulling, tugging, cutting, digging, sweating, huffing, puffing, heaving, hauling, carrying and pushing the trash. This was followed by counting, classifying and weighing the trash items recovered from the approximately 475m of shore covered.

The groups that battled on Chek Jawa were :-

The total weight of the items collected= 2.786 tonnes.

This is a very large amount of trash – however it is only a small fraction of the total amount still remaining at Chek Jawa and Noordin which we will tackle in the years to come.

Pulau Ubin’s high trash load was either deposited there in the past and present, or floats in with the tide. As with last year, many fish nets and large plastic drums were seen on the shore but the groups only managed to remove some of them.

See the detailed results from the day’s work at Pulau Ubin and other sites in Singapore at coastalcleanup.nus.edu.sg/results/2009/.

More news after the second phase of the International Coastal Cleanup on 19 Sept 2009 – this date is the actual date of the global community’s data collecting exercise.