21 Mar 2015 – 41 participants from all over Singapore came together to commemorate Singapore World Water Day with a Mangrove Cleanup at Sungei Pandan. Covering some 100m along the mangrove, we picked up 42 bags of trash, consisting of 283 kg of trash and 7,785 pieces of trash.

Top of the charts were plastic bags, with 3,719 pieces and second was 1,124 pieces of foam pieces (expanded polystyrene or EPS) which were collected and disposed.

Despite the threat of bad weather and a lost bus driver at the Kent Ridge pick-up point, the cleanup went smoothly and we wrapped up operations before the storm blew in! It was a heartening sight to seeing so many individuals from all around Singapore come together with the shared goal of removing whatever trash we could from the mangrove, inspiring Kai Scene to blog immediately after the cleanup!

Here’s Liz, who has been actively participating in ICCS events for awhile now!

Our youngest participant at 6 years old found something to bring home from the mangroves!
This is the “reuse” part of the “Reduce, Reuse, Recycle”

Some of our participants sank deep in the mud
and struggled to remove their wellys after the cleanup!

Sungei Pandan was heavily polluted in the 90’s, and when ICCS began operations in 2008, volunteers removed high loads of accumulated trash, typically collecting over a tonne in 90 minutes. In more recent years, even as plastics and styrofoam continue to be recruited into the habitat, the overall situation has improved tremendously with just a third of a tonne of trash removed in the last two cleanups!

In 2012 you can see how a low load of plastics can still dominate the landscape – Lim Cheng Puay, the ICCS South Zone Captain remembers this well.

Coastal cleanups should not have to be necessary. Our Saturday cleanup reminded us its critical for us to reflect on our day-to-day practices and adopt more sustainable alternatives. Simple things, like questioning whether we truly need that plastic straw in our teh-ping or milo-ping the next time we’re at the coffeeshop or hawker centre – we collected 362 straws and stirrers that Saturday. We use these for a mere 10 minutes, before disposal. With so many, some get into our marine environment to leach plastics and persist for a long time.

Thank you to everyone who came down to fight the good fight, and a big thank you to those who stayed to wash gloves and help with logistics!

Until the next cleanup!

As of now, 64 organisations have registered 3,131 volunteers to collect count, categorise and remove marine trash from 57 coastal sites around Singapore for the International Coastal Cleanup Singapore on or close to Saturday 13th September 2014.

Of the registered Organisations, 41% are from schools (including tertiary), 31% are corporate groups, 20% are NGO or volunteer groups and 8% are government entities.

Thanks for caring for the environment.

Next: our Workshop in July! 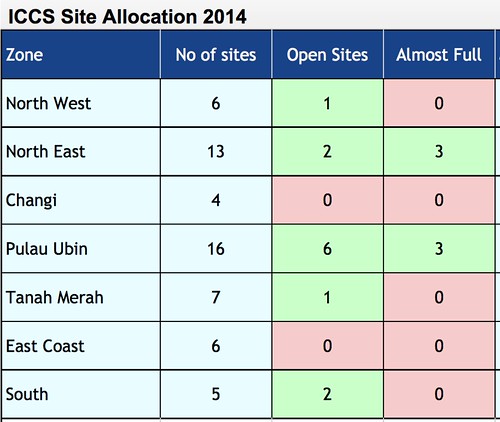 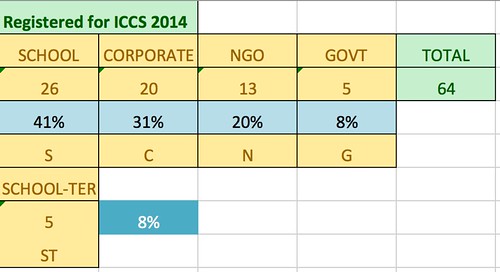 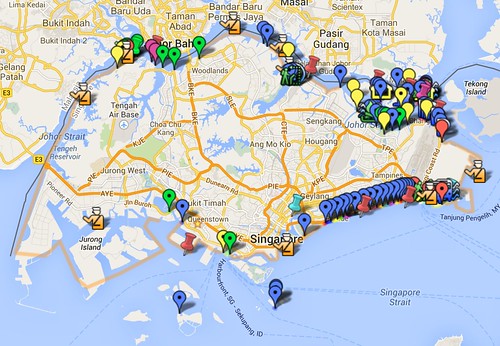 “The Ocean Trash Index presents state-by-state and country-by-country data about ocean trash collected and tallied by volunteers around the world on one day each fall during Ocean Conservancy’s International Coastal Cleanup®.

Volunteers have collected data since 1986, and the numbers are used to raise awareness, identify hotspots for debris or unusual trash events, and inform policy solutions.

Cleanups alone can’t solve this pollution problem. Nevertheless, the Ocean Trash Index provides a snapshot of what’s trashing our ocean so we can work to prevent specific items from reaching the water in the first place.” 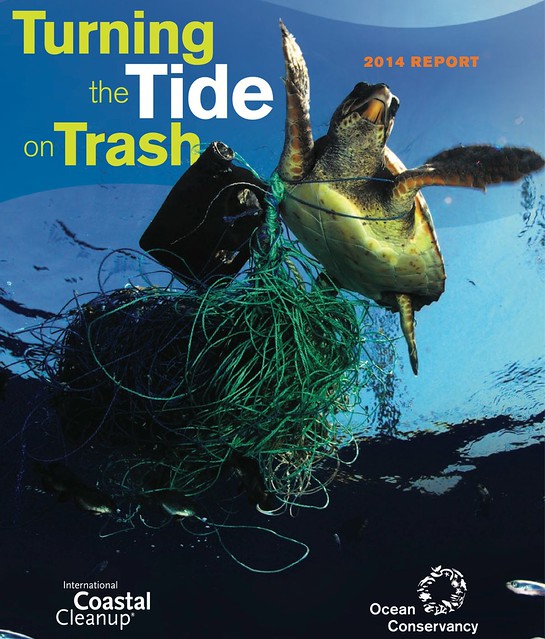 The Kranji East mangrove cleanup was a motivating effort with many determined people coming together to do their bit for nature. Almost 150 people responded to the call and cleared more than 1,500kg of trash from this shoreline.

The event generated quite a number of blog posts, which is simply lovely!

And there are photo albums too:

The 2012 Ocean Trash Index which is the compilation of data and reports from the 2012 international cleanups is now available.

“The Ocean Trash Index presents state-by-state and country-by-country data about ocean trash collected and tallied by volunteers around the world on one day each fall during Ocean Conservancy’s International Coastal Cleanup®.”

You can download a copy of the 2012 results now!

Washington, DC: Ocean Conservancy is releasing today a new report titled “Tracking Trash: 25 Years of Action for the Ocean.” This milestone report compiles data and stories about trash in the ocean, known as marine debris, for every participating state and country, collected from 2010 and as well as 25 years of International Coastal Cleanups—the largest volunteer effort for the ocean.

The report also highlights solutions from individuals to inspire behavior change and from companies to accelerate product innovation.

With this report, Ocean Conservancy is expanding its efforts from an annual cleanup day to a year round campaign for “Trash Free Seas”.

“Images of entangled birds, turtles choking on plastic bags and floating trash have become all too familiar,” said Vikki Spruill, President and CEO of Ocean Conservancy. “You name it, we have found it on the beach and in the water. We find beach litter like cigarette butts and plastic bags, toilet seats, washing machines, abandoned fishing gear—even the proverbial kitchen sink.”

“For twenty-five years we have watched as trash has threatened ocean wildlife and ecosystems; and undermined tourism and economic activity. We’ve seen more trash to clean up, but we’ve also seen more people inspired to be part of the solution.”

“Our vision is for Trash Free Seas,” said Spruill. “This problem is preventable, and keeping our ocean free from trash is one of the easiest ways we can make the ocean more resilient. From product design to trash disposal, we all have a role to play.”

Highlighted Results from the Past 25 Years of Cleanups

Graphics, photos and video for media reports are available at oceanconservancy.org/iccmedia.

Ocean Conservancy Report: Trash in Our Ocean has Become One of the Worst Pollution Problems We Face Threatening Ecosystems, Wildlife, and Coastal Economies
Data collected during the 24th annual International Coastal Cleanup provide the only global snapshot of the marine debris problem; 500,000 volunteers around the world removed 7.4 million pounds of trash from our ocean, lakes and rivers

Washington, DC – Today, Ocean Conservancy releases Trash Travels: From Our Hands to the Sea, Around the Globe, and Through Time – the only global snapshot of the marine debris problem facing wildlife, economies and marine ecosystems. Nearly 500,000 volunteers around the world combed their local beaches and waterways collecting trash and recording the data during the 24th annual International Coastal Cleanup – the largest volunteer effort of its kind. Volunteers removed and recorded 7.4 million pounds of trash in 108 countries and locations, 45 US states and the District of Columbia.

The report features Ocean Conservancy’s annual Marine Debris Index – the world’s only country-by-country, state-by-state analysis of trash in our ocean and waterways. Trash Travels also shines a spotlight on the growing threat of marine debris – one of our greatest global pollution problems.

“Momentum is building. There is a growing understanding of the significant impact trash has on wildlife, the economy and the productivity and resiliency of our ocean,” said Vikki Spruill, President and CEO of Ocean Conservancy. “The data generated by hundreds of thousands of dedicated volunteers around the world provide us with a global snapshot of the trash in our ocean, but cleanups alone cannot solve the problem – it’s time to stop marine debris at the source. From design to disposal, we all have a role to play: corporations can reduce packaging, governments can enact strong marine debris policies, and each of us can choose re-usable items, recycle when possible and put trash in its place.”

Marine debris is one of the most widespread pollution problems we face, with plastics making up approximately three-quarters of all trash floating in the ocean. Birds, fish and other wildlife can easily mistake smaller debris for food, choking the animals, or blocking the digestive system. For instance, sea turtles can easily mistake a plastic bag for a jellyfish with deadly consequences. Whales and dolphins can face a similar fate by ingesting larger items. Ropes, old fishing gear, and other larger debris items can pose an entanglement danger to wildlife, damage sensitive ocean habitats like coral reefs, and interfere with maritime safety and navigation.

“Eliminating the threat of marine debris will help improve the ocean’s resilience. Our ocean is our life-support system, and when we trash our ocean we are trashing our own health and well-being,” concluded Spruill.

The 2009 International Coastal Cleanup, by the numbers:

Ocean Conservancy’s International Coastal Cleanup engages volunteer organizations and individuals to remove trash and debris from the world’s beaches and waterways; to identify the sources of debris; and to change policies and behaviors that cause marine debris in the first place. The 25th International Coastal Cleanup to be held around the world on September 25th, 2010.

50 participants from Northland Primary School, Bioprocessing Technology Institute and Oil Spill Response arrived at Changi Beach Site 1, bright and early on Saturday, 19th September 2009. Rainclouds had started gathering but the gloomy sky did not dampen spirits as volunteers merrily chattered. And a short briefing got the merry crew ready for a “spring cleaning”!

As we began, a family of four at the beach observed us and decided to join in! They were kitted out with extra gloves from Oil Spill Response and a data card and that lowered the youngest age of our group to only three and a half years old!

Our youngest Captain Planet at work in saving the Earth! See how meticulous she is!

Andrew Tay, a veteran Site Buddy with the ICCS came once more to guide Northland Primary in their cleanup. As they worked on Changi beach, he filled them in on the status of marine trash in Singapore and how it affects the marine environment and marine life. The students were asking questions throughout and enjoyed Andrew’s stories!

Even though everyone was enjoying themselves from the fulfilling work, it began drizzling an hour into the cleanup and most then headed for the shelter and totalling up of numbers began.

Although the cleanup stopped short of the usual 90 mins due to rain, a considerable amount of trash was collected. The weight came up to 68 kg of trash and the most common items were cigarette butts and styrofoam pieces. We found a few odd things too – a tattered and thin mattress, some golf balls and a few table tennis balls.

Many participants felt that this had been an eye-opening experience. They were taken aback about the amount of trash they had encountered on a seemingly clean beach!

The trash that lies out there is innumerable and it is an impossible task to eliminate it all with a single cleanup. This exercise was primarily a data-gathering exercise and the effort was an important one in understanding the source of the problem.

There was also that sense of satisfaction when leaving Changi Beach that their efforts had Changi Beach a better place for our marine creatures to live in.

Never did I think the water will come in so fast and so high. The wide stretch of beach that was there just  a few hours before the cleanup simply disappear under the water.

Water-crossing has to be done and here are some ways to do it:

Mr. Mud Lobster gave applause to the wonderful performance by the water-crossers.