We held the first meeting of the ICCS Zone Captains last Friday, and it was lovely to welcome new volunteers who have stepped forward to help with operations.

There are new Zone Captains in East Coast, Tanah Merah and Changi as well as great new support for Pulau Ubin. and South Zones. In the month ahead, Zone Captains will be visiting their sites to check for changes and getting familiar with the site to best advise Organisers, who are registering for Site Allocation for the event in September.

Next we confirm Site Captains. 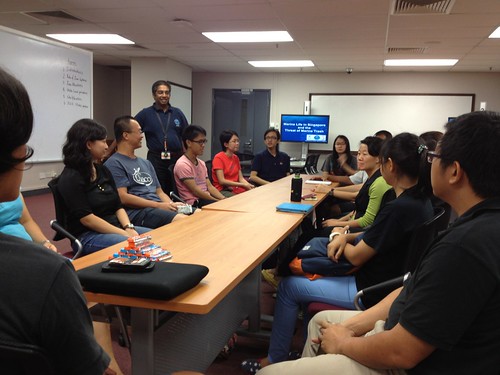 In preparation for the very first year round cleanup at Tanah Merah on the 11 Feb 2012, Benjamin Tan and Ching Yu Hang, both volunteer Site Buddies from the National Volunteer and Philanthropy Centre together with ICCS Tanah Merah Zone Captain, Xu Weiting and ICCS Recce Captain, Andy Dinesh headed out to TM7 on the 29th Jan, Sun to have a look at the trash load that we will be cleaning up in two weeks’ time.

Photo of Benjamin (right at the front), Dinesh (centre) and Yu Hang (back) surveying the shore in front of the newly built Workers' Dormitory, which has a great sea view.

We were greeted by a relatively clean shoreline this time round. However, this depends on the currents and winds which might sometimes cause the trash to be accumulated in usually large amounts. Hence, in order to be prepared, a recce trip is highly essential for any planning of a shore cleanup.

This area would usually be covered up with trash! Now you can see the nice sandy beach!

Besides looking at the trash load, we also saw inhabitants of the beach. This gave me a timely reminder of the motivation behind cleanups held more regularly rather than only during the International Coastal Cleanup in September. Every cleanup effort is important in helping to remove the marine litter that has adverse impacts on marine organisms and habitats.

A soldier crab on the sandy shores, one of the many organisms that calls Tanah Merah its home.

However, as we proceeded along the long stretch of sandy shore, the clean image of Tanah Merah starting to vanish. Instead, we started to notice more trash stranded on the upper shores and along the vegetation edge. We definitely have work to do during the upcoming cleanup.

Another important aspect about beach cleanups is safety. We encountered a single syringe on the TM7 shore and every year, we do get about 30 – 150 syringes per cleanup. In 2011, Singapore American School (SAS) found 33 syringes at their mangrove sites and this incident once again highlighted the importance of adhering to safety guidelines for every single cleanup, no matter how big or small.

Be safe & efficient! Be aware of your surroundings and always be careful of what you are picking up!

Below is another photo of the amount of trash (plastics, styrofoams and much more) awaiting for us to clear on the 11th Feb, Saturday. If you need more details of the cleanup, Site Buddy Gladys Chua has put out a blog post for any interested people.

With the start of the brand new year, let us not sit around and hope for the trash to vanish. Let’s take some action and do something about the marine litter found on our shores.

SOOOO CAN WE DO IT?

“Can you help me print 3 copies of the data card before you come down!” – I hollered over the phone to my primary school friend I had shanghai-ed as an ICCS Site Buddy, Dennis Chew.

Yes, I confess – yours truly, the Changi Zone Captain, had brought the gloves, trash bags, weighing scales and pens for the Independent Volunteers but forgot about the all-important Data Card!

So even as my dear friend Dennis was about to head out to pick me up, I was asking him to return home to print Data Cards!

After a mad rush of 30 minutes, we arrived on time at Changi Carpark 6 to start ICCS. Phew!! We did pay a price – we had to abandon our hot and eagerly anticipated Changi Village breakfast!

Their site was not an easy one – I had allocated them Changi Site 3 which has a higher trash load than Sites 1 or 2 and is less accessible – the nearest bus stop is a 10-minute walk away. But here they were, bright and chirpy.

I set my trusty site buddy Dennis to work with the Independents and headed out to drop in on various groups.

My first stop was Compassvale Secondary led by Mrs Winnie Lim where I kicked-off their cleanup with a briefing. Some students were bleary-eyed but I piqued their attention by asking “Why are you here to clean the beach? This is a recreational beach cleaned by contract workers who do a much better job on a daily basis!”

Yup, that’s right. At recreational beaches like this one, the main objective of ICCS is the data collection aspect which helps all of us understand the trash profile on the shore. With the objective realised, I felt confident as I left them to the trash and data collection.

After dropping in to meet the hardworking Girl Guides Singapore (South Division c/o Queensway Girl Guides) and Baxter Bioscience, I then called up my chauffeur to drive me to Changi Sites 1 and 2.

That’s right – my chauffeur! Who was none other than my dear site buddy and good friend, Dennis Chew. So for the rest of the morning, he drove me around and accompanied me as if we were on a campaign trail – visiting groups, talking to Organisers and participants and finally collecting their votes.. erm.. I meant consolidated Data Cards.

I did not manage to visit some groups but they were doing great – such as Dow Chemical Pacific (Singapore) Pte Ltd led by Linda Lim. She texted me when she arrived and submitted the data all typed in excel that afternoon; great job!

It was cool to see Black & Veatch (SEA) Pte Ltd led by Chen Feng who were all togged out in an event T-shirt. Catrin Huxtable was leading the Australian International School Singapore, and they were thorough, picking up small lumps of crude oil probably left over from the oil spill last May.

Our final stop on the campaign trail was to debrief one corporate group. With one of their top trash items being plastic containers, I compared the disposable plastic water bottle Organisers had provided to volunteers and the reusable Camelbak water bottle one of the company staff was drinking from.

Yup, it is that simple. With ICCS data pointing to the prevalence of single-use plastics reaching our beaches, we emphasise many ways to combat this – responsible disposal of trash, less use of resources or the use of biodegradeable material. But the most effective method is to avoid the use of plastic disposables in the first place!

Easily available now are reusable water bottles, carrier bags, tupperwares and the like. With reducing disposables being the most effective strategy, it is no wonder that “Reduce” leads the way in the 3Rs.

If you wonder if washing a reusable bottles will use more resources such as water and detergent as compared to disposables, check out this ecological intelligence article by the author of Emotional intelligence, Daniel Goleman in New York Times.

“Reusing” is a concept not only for daily necessities but for friends as well. Hmm, I wonder if I can I use my friend Dennis again at next year’s ICCS!

See you at the beach, everyone!

My 3rd year in the Northeast Zone sailed by peacefully. Thankfully, for the three of us in-charge (Lim Chen Kee, Cheong Wei Siong and yours truly Ng Kai Scene), it has been a “stable” year. We got back our veteran groups and the only changes were the re-opening of Sungei Tampines and the temporary closure of Sembawang Beach, due to renovation works.

Yes, life has been good! So good that one of the deputy zone captains wondered whether we should challenge ourselves with a more difficult zone next year?!

Northeast - Some sites at a glance

Me? I am just grateful for the stability. So what if this year I did not get to “start-up” new sites? (We started Pasir Ris Site 6 and Sungei Seletar respectively in the last two years.) To continue bringing participants to cleanup these new sites is good enough to me. In fact, we brought many more people (240 in total) to Pasir Ris Site 6 this year vs. 64 in 2010!

I am particularly keen on cleaning up at places such as Pasir Ris Site 6 and Sungei Seletar, because they are easily forgotten pockets of coastline in Singapore where trash accumulates. Another easily forgotten spot, albeit a way smaller one is the Sungei Tampines mangrove. So, I would count the re-opening and cleaning up of Sungei Tampines mangrove as something worth celebrating this year. Sungei Tampines is located right in the middle of Pasir Ris Park. However, its east and west banks are hidden by trees and bushes. Other than the odd fisherman or two, regular park users rarely bother to come here.

Our enthusiastic group of 20 volunteers from Miss Earth Singapore, Environment Resource Management and other Independents did a great job clearing 282kg of trash from the site.  It was also gratifying to read that our new volunteer, Deanna, had a good cleanup experience there.

Fewer changes in the zone also meant more time to think of other issues – and Safety was at the top of my list. Although safety is always at the back of my mind, the discussion about safety guidelines with regards to the bloody syringe incident emphasised the issue and I was in a heightened state of alertness while briefing participants and talking to Organisers.

I also appreciated the trash weighing and data collation aspects of our operations more. During the Sungei Tampines mangrove cleanup, I wished we had filmed our volunteers systematically weighing the trash and the Data I/Cs gathering to collate site data. It would have been great footage for a “How to Conduct a Cleanup” video in the future! After I briefed the volunteers, they were really willing to contribute and were thorough!

Securing the trash bags before weighing

Data I/Cs concentrating on their task!

Your not-so-ambitious, easily satisfied Northeast Zone Captain signs off here as she happily looks forward to attending the upcoming ICCS debrief and chill out time with her fellow ICCS Otters.

For more pictures of the Sungei Tampines cleanup, see the Flickr album.